Get the Reef Fish Florida & Caribbean app for iPhone®, iPad™ and iPod touch®! 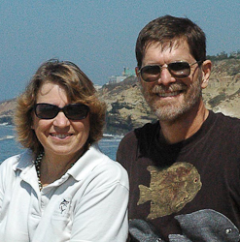 SeaClicks was founded by underwater photographers Patrice Marker and Robert F. Myers. This website serves to showcase their extensive library of images of tropical marine species and environments as well as offer photographs, books and related products for sale.

Rob is a marine scientist specializing in coral reef fishes. He started photographing marine life in 1970 and has written several identification guides including Micronesian Reef Fishes, Coral Reef Fishes – Indo-Pacific and Caribbean, Coral Reef Guide - Red Sea, and Dangerous Marine Animals. He maintains a large database of tropical marine fish distributions and is active in the scientific community. He currently serves with the IUCN (International Union for the Conservation of Nature) as a member of the Global Marine Species Assessment group. Current projects include a Caribbean field guide as well as fish-id applications.

Patrice joined forces with Rob in 2000. Many of her images are featured in his books. She is the primary technical force behind the scenes as well as the designer of this website.